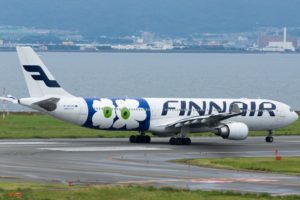 The revenue of airline Finnair increased by 10% YoY in 2018 to 2.835 billion USD. The company’s operating profit amounted to 169.4 million EUR and remains at the same level as a year earlier. Finnair transported 13.3 million people in 2018, which exceeded the previous year’s figures by 11.6% and became a new record, while the passenger traffic grew by 14.8%.

In 2018, Finnair continued its accelerated growth in both passenger and travel services, but the second half of the year was more intense. Among the challenges that Finnair had to overcome, CEO of the airline Topi Manner called the increase in prices for aviation fuel, increased competition in a number of European destinations in the second half of the year and uncertain growth rates of the global economy in the near future.

“One of the important steps that allowed Finnair to achieve high performance again was the expansion of the route network. The airline began operating regular flights to new European and Asian destinations – Lyon, Nanjing, Lisbon, and Stuttgart, and also increased the frequency of flights to Tokyo, Osaka, Hong Kong, Dubai, Malaga, Alicante, and other cities. The growth was affected by the extension of the period of seasonal flights to Chicago and San Francisco for two months: flights in these areas in 2018 were made until December” noted Finnair.

The airline’s fleet in 2018 included 57 aircraft – 20 wide-bodied and 37 narrow-bodied. One new Airbus 350XWB was put into operation – the airline now has 13 such aircraft, and in 2019-2022 six more such aircraft will be delivered. Finnair constantly continues to increase the level of comfort for passengers – liners serving European destinations were equipped with onboard Wi-Fi in 2018, which was a continuation of a large-scale program launched a year earlier. It is planned that by the summer of 2019 wireless internet will be available on board all narrow-bodied Airbus planes in Finnair fleet.

“As the new CEO of Finnair, I note the sincere commitment of the airline, which brings together our customers and our employees. It is this that serves as a solid foundation on which we together can build the future of Finnair. I would like to thank our passengers for the trust they have in us, as well as all Finnair employees for their excellent work in 2018″, said the CEO of Finnair, Topi Manner.

Finnair is the flag carrier and largest airline of Finland, with its headquarters in Vantaa on the grounds of Helsinki Airport, its hub. Finnair and its subsidiaries dominate both domestic and international air travel in Finland. Its major shareholder is the government of Finland, which owns 55.8% of the shares. Finnair is a member of the Oneworld airline alliance.