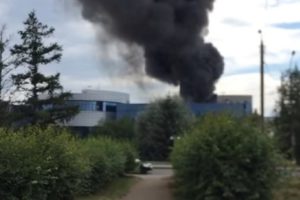 The fire erupted on the territory of the anode-paint workshop of the Russian aircraft manufacturer Irkut. The accident happened around noon and no evacuation was required, but the work of the plant was halted during investigation. There were no reports about injuries during the incident.

“There was a fire in the anode-paint workshop, where polypropylene inflames. Within a few minutes, the fire was extinguished by the firefighters of the aircraft factory. There were no sufficient damages no casualties”, said representative of the aircraft manufacturer Irkut.

A source in the emergency service of the region clarified that the fire occurred at lunchtime, so evacuation of workers was not carried out.

“A call was received, firefighting units moved to the scene, but before they arrived, the fire was extinguished by the firefighters of the aircraft factory”, added the emergency service of the region.

The plant has manufactured nearly 7,000 aircraft of more than 20 types since 1934, which were delivered to 40 countries.

The JSC Irkut Corporation is a Russian aircraft manufacturer, headquartered in the Aeroport District, Northern Administrative Okrug, Moscow, and is best known as being the manufacturer of the Sukhoi Su-30 family of interceptor/ground-attack aircraft. The company was founded in 1932 in the Transbaykal region of the Soviet Union as the Irkutsk Aviation Plant (IAP). The Russian government merged Irkut with Mikoyan, Ilyushin, Sukhoi, Tupolev, and Yakovlev as a new company named United Aircraft Corporation.