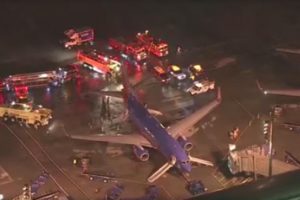 Fire occurred on board Southwest Airlines’ Boeing 737, who was waiting for the team to take off at the international airport of Los Angeles (California). There were 139 passengers and five crew members on board, and the pilot decided to evacuate all the people aircraft’s front emergency slides just after the plane had pushed back from the gate.

The fire was in the reserve power unit and was extinguished by the firefighters of the airport. There were no reported injuries among the passengers and crew.

The aircraft was about to make a flight from Los Angeles to San Jose.

John Wayne Airport resumed its work after the situation was taken under control. The traffic was slightly affected with just a few delays.

The Boeing 737 is a short- to medium-range twinjet narrow-body airliner developed and manufactured by Boeing Commercial Airplanes in the United States. Originally developed as a shorter, lower-cost twin-engine airliner derived from the 707 and 727, the 737 has developed into a family of ten passenger models with capacities from 85 to 215 passengers. The 737 is Boeing’s only narrow-body airliner in production, with the 737 Next Generation (-700, -800, and -900ER) and the re-engined and redesigned 737 MAX variants currently being built.