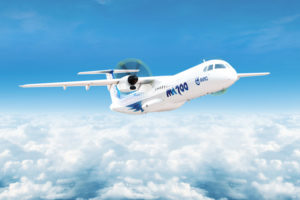 Xian MA700 will be the third aircraft in the Modern Ark (MA) family after the MA60 and MA600. The new aircraft was designed by AVIC XAC Commercial Aircraft (AVIC XACC). It is expected that the MA700 will receive a type certificate by 2021. Currently, the developer company has already received 185 orders from 11 Chinese and foreign partners for this aircraft.

The project to build this aircraft was officially approved at the ministerial level in 2013. MA700 will be adapted for operation, in particular, in the conditions of high mountains and high temperatures. According to official data, its maximum flight range will be about 1,700 km. The aircraft is designed to fly at speeds up to 550 km/h.

The MA700 is being developed as part of the Chinese program to reduce the country’s civil aviation dependence on foreign supplies. The program also includes the already operating regional ARJ21 jet, the narrow-body jet aircraft C919, which in May 2017 made its first test flight in Shanghai, as well as the long-range wide-body airliner CR929 being developed jointly with Russia.