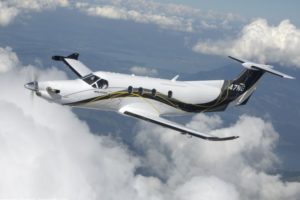 The first operator of business aviation was established in Belarus. It will start flights in its own fleet of turboprops and jet aircraft with a capacity of up to 10 seats in 2018, according to the corresponding investment agreement signed with the Ministry of Transport and Communications.

In addition, the investment agreement provides for the creation of a multifunctional complex, the Business Aviation Center, by the year 2019 at the Minsk National Airport. As expected, on August 29 in Minsk will be signed an agreement with one of the oldest European manufacturers – Swiss Pilatus Aircraft Ltd. to purchase two new Pilatus PC-12 aircraft.

Pilatus PC-12 is the world’s best-selling turboprop business aircraft in its class. It features with spacious, comfortable passenger cabin, high payload capacity and good cargo potential. The range of flight covers whole Europe. The possibility of exploitation, including in small airports and on complex runways with a short length, efficiency in servicing has made this model more popular: there are more than 1,500 such aircraft in the world with a total flight of over 6 million hours. The Pilatus fleet is already represented in Eastern Europe and Russia.

Within the framework of the agreements reached on the basis of FBO Minsk, a regional center for servicing and maintenance of Pilatus aircraft for Eastern Europe is planned. The company Pilatus Aircraft was founded in 1939 in the city of Stans (Switzerland). At present, 1,961 people are employed in high-tech production, design and design of the Pilatus Group aircraft. Pilatus production is certified according to EN / AS 9100 and ISO 9001 standards. In 2016 Pilatus Aircraft delivered 91 aircraft PC-12, which is 30% more than the previous year.