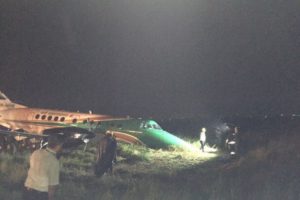 British Aerospace Jetstream 41 of Yeti Airlines suffered runway excursion during landing at Kathmandu, Nepal. The aircraft was performing flight from Nepalgunj to Kathmandu, but during landing veered left off the runway and came to a stop on a soft ground, causing injury of 5 passengers. The crew reported the accident to the airport and requested immediate assistance.

All the 21 passengers and 3 crew have been evacuated and are safe. Tribhuvan Airport reported 5 passengers received serious injuries and were taken to a hospital for medical treatment.

The British Aerospace Jetstream 41 suffered substantial damage. The nose gear collapsed and the fuselage has some structural damages. Further inspection will show the condition of the airplane.

The airport was closed for 12 hours, but after towing the aircraft on safe distance form the runway, the operations were resumed.

The British Aerospace Jetstream 41 is a turboprop-powered feederliner and regional airliner, designed by British Aerospace as a stretched version of the popular Jetstream 31. Intended to compete directly with 30-seat aircraft like the Embraer Brasilia, Dornier 328 and Saab 340, the new design eventually accommodated 29 passengers in a two-by-one arrangement like the Jetstream 31. Eastern Airways of the UK is the biggest operator of Jetstream 41s in the world, with 14 in the fleet.