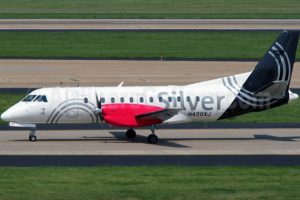 Silver Airways Saab 340B encountered severe turbulence during a flight from Key West to Orlando in Florida, USA. The aircraft was descending towards Orlando, but was caught by heavy turbulence, causing injuries to five passengers. The aircraft proceeded for safely landing on Orlando’s runway 18R, where all the people were disembarked.

Silver Airways reported that five people received minor injuries during the incident. The people did not needed hospitalization and were checked by medics on the airport.

The local authorities and FAA initiated investigation for the accident. The aircraft did not suffered damages during the incident and after regular inspection was released to return in service.

Saab 340 is a Swedish twin-engine turboprop aircraft designed and initially produced by a partnership between Saab AB and Fairchild Aircraft. Under the initial arrangement, Saab constructed the all-aluminium fuselage and vertical stabilizer along with final assembly of the aircraft in Linköping, Sweden, while Fairchild was responsible for the wings, empennage, and wing-mounted nacelles for the two turboprop engines. After Fairchild ceased this work, production of these components was transferred to Sweden.