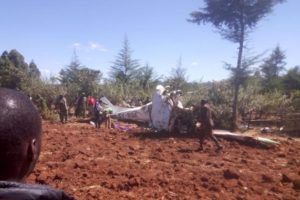 Five people died after light aircraft Cessna 206G crashed near Makutano Forest in Kericho County, Kenya. The plane with four tourists and one pilot was flying from Ol Kiombo in Maasai Mara to Lodwar in Turkana County, but shortly after takeoff lost the attitude under unknown circumstances and crashed in the rural area. All the people on board died in the accident.

Nationalities of the victims are yet to be established. It was reported that tourists were two men and two women from the Caucasian race.

The cause of the crash was not immediately established and the investigation is underway. According to preliminary information, the Cessna plane developed a mechanical problem before hitting a tree.

Witnesses gathered at the scene to try to save the injured, but they weren’t successful.