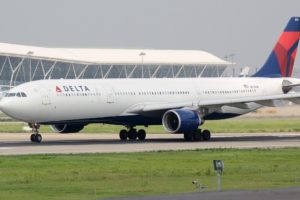 Five people were injured after Delta Airline’s plane Airbus A330-200 made emergency landing at the Murtala Muhammed International Airport in Lagos, Nigeria. The aircraft was en route heading for Atlanta, USA. The aircraft Airbus A330-200 had an issue with one of its two engines and was forced to return and makes emergency landing. Fortunately the maneuver completed successfully and passengers were evacuated onto the runway down emergency slides.

The airline reported that five passengers reported non-critical injuries during the evacuation.

“Delta teams have provided overnight hotel accommodations to customers and will rebook customers on an alternate Delta aircraft on Wednesday. The safety of Delta’s customers and crew members is always our top priority”, reported Delta Airline in official statement.

The A330 was developed in parallel with the four-engine A340, which shared many common airframe components but differed in number of engines. Both airliners incorporated fly-by-wire flight control technology, first introduced on an Airbus aircraft with the A320, as well as the A320’s six-display glass cockpit. The A330 was Airbus’s first airliner that offered a choice of three engine types: General Electric CF6, Pratt & Whitney PW4000, and Rolls-Royce Trent 700.