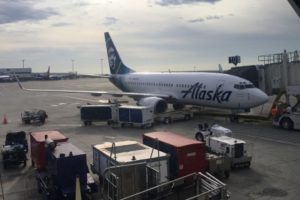 Flight of Alaska Airlines from the Californian airport of Auckland was canceled because of the rats found on board the aircraft.

The plane was preparing to fly from Oakland International Airport to Portland when a rat ran into its board. The flight attendants could not catch it, so the flight was canceled. The rat is believed to have jumped on board when passengers were deplaning from the previous flight from Portland.

“The plane is currently on the ground. It will be returned to operation as soon as the professional pest controler assures that there are no rodents on it”, says the official statement of Alaska Airlines. According to it, the plane will also be checked for possible damage caused by the rat, including the electricity systems.

The passengers were rebooked for other flights to Portland.

The plane will return to service after it has been certified rodent-free by a professional exterminator. Officials said the plane will also be examined to ensure no damage has been done.