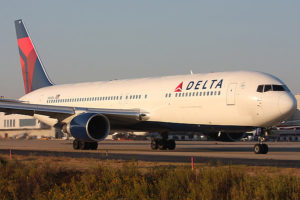 Several flight attendants of the Delta Air Lines accused the company in anti-Semitism, according to a lawsuit filed with the Brooklyn court. The four current and former flight attendants allege in Tuesday’s suit that management has an “anti-Jewish, Hebrew, and ethnic Israeli attitude”.

According to the flight attendants, Delta Air Lines allegedly believes that workers and passengers who are Jewish can not be trusted, they are aggressive, behave improperly – in particular, their habit of praying on board and requiring them to provide kosher food is “strange”.

The suit also says that the company is unhappy with employees who provide preferential ticket clearance for passengers traveling to Tel Aviv. Another allegation in the lawsuit is that Delta fired a female flight attendant in March 2017 because she was Jewish, while the company said it was because she missed a flight. She was reportedly on medical emergency leave at the time.

The carrier, in turn, said that has “zero tolerance for discrimination”, “resolutely rejects” the allegations stated in this claim and will “vigorously defend”.