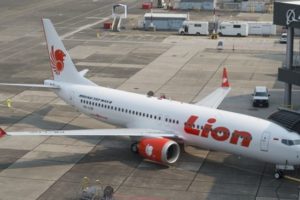 The flight recorder of the crashed Lion Air’s Boeing 737 MAX 8 was damaged, revealed the Deputy Chairman of the National Committee for Transport Safety Haryo Satmiko.

“The flight recorder was found out of order, it is broken down into two parts”, said Haryo Satmiko. At the same time, the memory of the device is not damaged. However, working to retrieve data will have to be extremely cautious, which can increase the time it takes to receive the information stored in the recorder.

Earlier the search operation commander confirmed that the aircraft’s fuselage was found, but not an entire part and only pieces. According to him, it was also possible to detect the engine and the body of the aircraft. They were located at the bottom about 400 meters from the original search point. The fuselage has already been lifted from the bottom, but a crane may be needed for the engine.

One of the flight recorders of the Lion Air’s Boeing 737 Max 8 was found and raised the surface on November 1. It was discovered under water at a depth of 32 m. Currently, experts are trying to get the second recorder.

Earlier it was noted that the search for the aircraft is hampered due to poor visibility and strong undercurrents. The rescuers also reported that there were no survivors after the liner crashed, the remains and personal belongings of the victims were found at the crash site.

Lion Air’s passenger aircraft Boeing 737 MAX 8 disappeared from the radar 13 minutes after taking off from Jakarta. It operated a JT610 flight en route to Pangkal Pinang. The crew before the fall requested a return to the airport of departure. There were 189 people on board: 181 passengers, including employees of the Ministry of Finance of Indonesia, two pilots and six crew members.