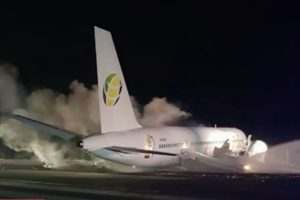 Fly Jamaica aircraft Boeing 757-23N suffered a runway excursion after returning to land at Georgetown-Cheddi Jagan International Airport in Timehri, Guyana. The airplane departed Georgetown Airport, performing flight OJ256 bound for Toronto, but shortly after takeoff reported issue with the hydraulic system. The climb was stopped and the aircraft turned back to Georgetown Airport. During landing the aircraft went off the runway and came to rest across the airport perimeter fence.

During the accident on board of the aircraft were 118 adults and two infants aboard as well as eight crew members made up of six Guyanese and two Jamaicans. The passengers included one American, 82 Canadians, 35 Guyanese, one Pakistani and one Trinidadian.

Six people were injured during the hard landing and runway excursion, all moved to Diamond Regional Hospital without life-threatening injuries.

“They are all stable and are being looked at”, said Minister of Public Infrastructure of Guyana, David Patterson said. He added that all the persons aboard have been accounted for with minor injuries. “No reports of any broken bones or such”, said also he.

The aircraft sustained substantial damage. The right-hand main landing gear had broken off, and the no.2 (right-hand) engine pivoted forward and upwards.