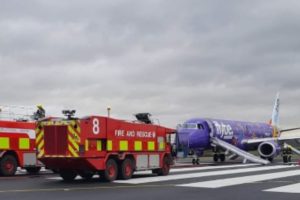 Flybe flight BE4321 has been evacuated at Exeter Airport due to smoke in the cabin. The airplane Embraer ERJ-195LR was preparing to take off en route to the Spanish resort of Alicante, but after taxing to the runway, the pilot’s cabin filled with smoke and the commander requested evacuation of all 104 passengers. The emergency evacuation slides of the aircraft were deployed and all the passengers disembarked at the runway.

Two airport fire engines rushed to the plane to investigate the technical problem with the air-conditioning. The flight was canceled. Passengers were taken back to the terminal by bus where they were told that another flight was being arranged.

During the evacuation, one person suffered an ankle injury and will be treated.