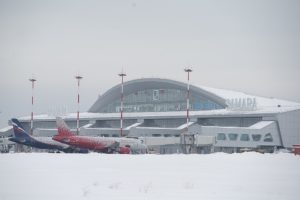 Flydubai airplane Boeing 737 made an emergency landing at the Kurumoch International Airport in Samara, Russia, with icy flaps. The aircraft was performing a flight FZ 903 from Dubai to Samara with 170 passengers and seven crew members aboard. The aircraft landed with a slight delay. No injuries were reported during the accident.

“At 13:50 a message was received about frozen flaps of a Flydubai aircraft, which was flying from Dubai to Samara, due to icing. At 14:22, the aircraft landed at Kurumoch airport with a slight delay”, says the official statement of the local authorities.

No additional security measures were taken in connection with the landing of the aircraft. The emergency teams were on standby, but the pilot succeeded to landed without any significant problems.

After determining froze of the flaps, the pilot of the aircraft requested an emergency landing. Investigation for the root cause of the accident is underway.

Flydubai, legally Dubai Aviation Corporation, is a government-owned low-cost airline with its head office and flight operations in Terminal 2 of Dubai International Airport. The airline operates a total of 95 destinations, serving the Middle East, Africa, Asia and Europe from Dubai.