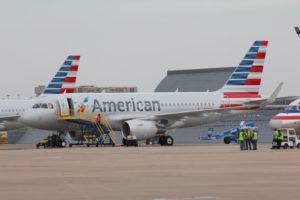 Foul odor developed on board of the American Airlines plane Airbus A319-100 after mechanical problem, causing number of passengers to suffer from nausea and headache. The aircraft was en route from Charlotte to Raleigh/Durham airport, but during the flight several passengers felt uncomfortable suffering headache. However, the airplane proceeded to Raleigh/Durham airport, where landed safely and taxied to the gate. All the passengers were disembarked normally, while some medical attention at the airport.

“We did have an aircraft from Charlotte to RDU this afternoon, that landed at 2:19 p.m. ET, and arrived the gate at 2:21 p.m. ET, that is currently out of service for an actual mechanical issue – and odor in the cabin”, said the American Airlines spokesman, Ross Feinstein, responding to media comments that passenger passed gas on the airplane cabin.

“Plane was not evacuated. Medical call for persons affected by an odor came in after plane deplaned normally”, confirmed the airport officials.

The occurrence aircraft remained on the ground in Raleigh for about 18 hours, then positioned back to Charlotte and resumed service.

Airbus A319 is a member of the Airbus A320 family of short- to medium-range, narrow-body, commercial passenger twin-engine jet airliners manufactured by Airbus. The A319 carries up to 160 passengers and has a maximum range of 6,900 km.