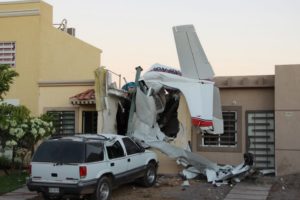 Light aircraft Cessna U206 crashed at Rincon Real neighbourhood in Culiacan, Mexico. All the four people on board died at the scene of the crash.

The aircraft took off at 16:45 hours local time from the Culiacan Airport for a test flight with four people on board. Unfortunately only seven minutes later, the pilot lost control after mechanical failure and crash with full speed at a house in Rincon Real neighbourhood. Luckily there were no casualties on the ground, but three people were injured, including one woman and two children. All the people on board died at the scene.

The local authorities initiated an investigation for the root cause of the accident.

It was also announced that the plane was not owned by the victims, but by an air taxi company and for the transfer of goods.

Cessna U206 is powered by a 285 hp (213 kW) Continental IO-520-A. The “U” designation indicated “utility” and this model was equipped with a pilot side door and large clamshell rear door serving the back two rows of seats, allowing easy loading of oversized cargo. There was a TU206 turbocharged version powered by the Continental TSIO-520-C engine producing 285 hp (213 kW).