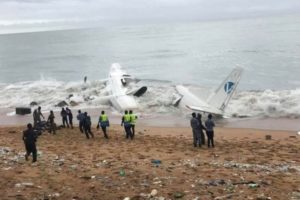 Cargo airplane Antonov An-26 crashed at the shore during approach to runway of the Abidjan-Felix Houphouet Boigny Airport in Cote d’Ivoire. The aircraft, carrying 10 people on board, came down in the sea just 650 meters from the threshold of the runway, which resulted in braking upon water impact. Four people from the passengers died in the aviation crash, while another 6 were rescued with different kind of injuries, but no life-threatening wounds.

The airplane Antonov An-26 was chartered by the French Army, carrying on board six Moldovan crew and four French army personnel, part of the anti-terrorist operation Barkhane. The victims of the accident were pilot and three crew from the airplane, all Moldovan nationalities.

“While waiting for all the information about this plane crash, we know only that this morning around 8:30 am, an Antonov type plane crashed on the beach here in Port-Bouet with ten passengers on board”, said Minister of the Interior and Security, Sidiki Diakite. “Of the ten passengers, we register four dead people and the other six are injured. Among the six people injured we have four French and two Moldovan citizens”, added he.

The investigation for the root cause of the accident is under way. According to information, during the landing there was thunderstorm around the airport, which might cause the accident.

The Antonov An-26 is a twin-engined turboprop civilian and military transport aircraft.