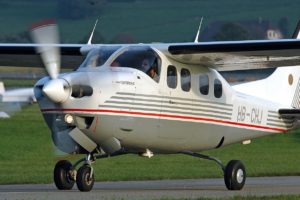 Four people are dead after a small airplane Cessna P210N crashed near Solunska Glava in North Macedonia. The aircraft was performing a flight from Ohrid to Sofia (Bulgaria) with four people on board, all from Bulgarian nationality, but went missing after the pilot reported high turbulence after crossing an area with bad weather conditions. The four people are a family of man, woman and two kids.

The pilot asked to land in Skopje but later decided to proceed to Sofia. Unfortunately, the airplane crashed near the area of Solunska Glava, the highest peak of the Yakubitsa mountain in the central part of North Macedonia.

“At 16:16, we lost contact with the Cessna P210 plane, which has flown from Ohrid to Sofia. Due to poor weather conditions, the pilot has decided to land in Skopje, while for a short period of time has asked for permission to continue in Sofia, before losing the radar the pilot has reported that the plane has a lot of turbulence”, said Civil Aviation Agency Director, Nikolce Tasevski. “Later, the bodies of the four people and the wreck of the aircraft were found”, added he.