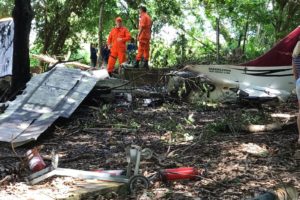 Four people died and one was serious injured after light single-engine aircraft Cessna 210M Centurion crash in the Serra da Lua region near Igarape do Inácio, in central-eastern region of Roraima, Brazil. The accident occurred shortly after takeoff and aircraft fell into the forest. During the accident on board of the plane there were five people, four of which immediately died, while another was is in serious condition and transported to the local hospital.

The root cause of the accident is under investigation. The local authorities and police departments are checking the circumstances around the airplane crash. The four bodies are at the scene of the accident waiting for the expertise.

The injured person is in serious situation with life-threatening injuries. He is rescued by person nearby, who transported him to the local hospital.

The aircraft Cessna 210M Centurion belonging to the company of Paramazonia Taxi Aerero chartered by the Brazilian Army. The statement of the charterer says that they conducts an inspection of the aircraft on a daily basis, so the rescue equipment on board the aircraft was in a state of full readiness for use. Now the company is also checking the root cause of the accident.