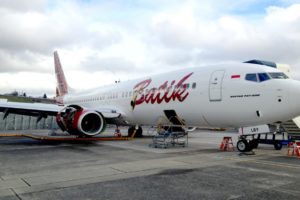 Aircraft Boeing 737-900 of Batik Air encountered severe turbulence during climbing out of Surabaya in Indonesia. The aircraft took off en route to Jakarta, but entered in area of low pressure in clean air, which caused serious turbulence and injury of two passengers and two cabin crew. The pilot continue climbing and resumed the flight to Jakarta, where landed about an hour later. The four injured people were taken to the hospital for medical treatment, but it was estimated that injuries are not serious. However, people remained in the hospital for medical examinations and under monitoring by medical teams.

The airline reported the aircraft encountered unexepcted clear air turbulence, which caused the accident. According to Batik Air one passenger received minor injuries, while another passenger suffered a shock. Their condition is stable.

The aircraft did not suffered damages during the turbulence, but after landing remained on ground for special safety survey and inspection.

The investigation for the accident is under way.

Boeing 737 is a short- to medium-range twinjet narrow-body airliner developed and manufactured by Boeing Commercial Airplanes in the United States. The aircraft has developed into a family of ten passenger models with capacities from 85 to 215 passengers.