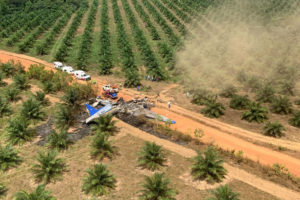 Fourteen people died after LASER Aereo plane Douglas DC-3 crashed near the city of Villavicencio in central Colombia. The aircraft departed from San Jose del Guaviare-Jorge E. Gonzalez T. Airport, but at the approach to Villavicencio Airport the plane suffered engine problem and the pilot attempted to land on a dirty rural road. Unfortunately, it was unsuccessful and the aircraft Douglas DC-3 was completely damaged during the crash and subsequent fire. There were no survivors from the fourteen people on board (12 passengers and 2 crew).

The pilot declared an emergency minute before falling into the rural area of La Bendicion.

“At the moment of flying over the municipality of San Martin, an engine turns off and the pilot tries to land, but it gets out of control”, says the statement of the Civil Aeronautica de Colombia. “Unfortunately, according to the information provided by the rescue agencies that arrived in the area, there are no survivors”, adds the statement..

Among the victims was the mayor of the municipality of Taraira, Doris Villegas, and her husband and daughter, as well as the owner of the aircraft, pilot Jaime Carrillo, co-pilot Jaime Herrera and an aviation technician identified as Alex Moreno.

Douglas DC-3 is an American-made twin-engine propeller plane that was first produced in the 1930s. The DC-3 is a twin-engine metal monoplane with a tailwheel-type landing gear.