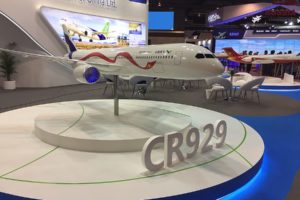 France plans to take part in the creation of the Russian-Chinese wide-body long-haul aircraft CR929. This was stated by Bertrand de Lacombe, director of international relations at the French Directorate General for Civil Aviation (DGAC), on the sidelines of the XXIV session of the Russian-French Council for Economic, Financial, Industrial and Trade Issues.

“France is interested in taking part in the project together with Russia and China”, said Bertrand de Lacombe. According to him, French companies want to take part in a tender organized by Russian and Chinese manufacturers.

He did not specify in what part of the development and production French enterprises are ready to undertake, noting that they have sufficient capacity to create both engines and other parts and structures.

“We have already expressed our interest to the Chinese partners at the November air show in Zhuhai. They also made it clear that they are very interested in the participation of French enterprises in this project”, added Bertrand de Lacombe.

As Ravil Khakimov, Director of the Aviation Industry Department at the Ministry of Industry and Trade of the Russian Federation, stated at the meeting, the parties will develop project cooperation on a competitive basis if French suppliers comply with economic and technical requirements, as well as when they are ready to work in the sanction regime.

Later, Khakimov clarified to journalists that the stage of requesting and collecting proposals from suppliers for CR929 is now underway. As for the French suppliers, the willingness to participate in the tenders was expressed by the enterprises Zodiac Aerospace (manufactures avionics for aircraft), Thales (produces information systems for onboard equipment) and Safran (manufactures aircraft engines).

The liner project has been implemented since 2014. The aircraft will be developed in Russia, and assemble in China.

The basic CR929-600 version in a three-class layout will be capable of carrying 280 passengers over a distance of up to 12,000 km. The aircraft family will also consist of a modification with an extended fuselage (CR929-700) and a shortened fuselage (CR929-500).