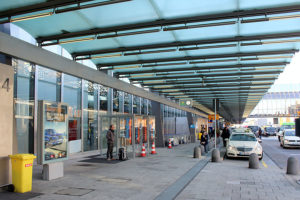 The company Fraport AG, which manages the Frankfurt International Airport, together with the manufacturer of drone Volocopter GmbH, is developing a new air taxi service.

“The unmanned flights will significantly change aviation in the coming years”, said Anke Giesen, a member of the executive council for operational processes at Fraport AG. “We want to be the first airport in Germany to exploit the potential of flying robotic taxis”, added she.

It is assumed that the device Volocopter Port will allow to connect with each other urban transport hubs and to ensure communication of various areas of Frankfurt with the air harbor. To introduce a new service will require changes in the ground infrastructure, the concepts of which the airport and the manufacturer of drones will also be developed jointly.

“Providing a perfect connection between the center and the air gates is a big challenge for the main cities of the world”, said the CEO of Volocopter, Florian Reuter.

Fraport is already operating unmanned aerial vehicles: as part of the FraDrones air harbor program, multi-rotors of vertical take-off are being tested, which will soon also be used in urban transport. Volocopter for its part released a drone that can withstand two people.