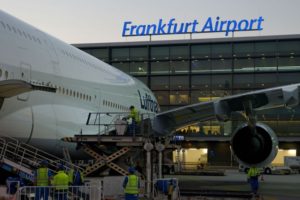 Frankfurt Airport, which is German busiest airport, suspended operations on Thursday morning after a drone was spotted in the vicinity. The flights have been resumed later after Police confirmed that the issue had been resolved, but declined to give further details. The suspension caused cancelation of about 70 flights, affecting more than 15,000 passengers.

“Around 70 flights were canceled due to the drone sighting”, confirmed the airport spokesperson.

The investigation of the accident is underway.

Last year, the German air traffic control group DFS saw a massive spike in the number of disruptions due to drones. They logged 158 disruptions in 2018, compared to 88 in 2017. Most of the disruptions hit Frankfurt.

Frankfurt Airport is a major international airport located in Frankfurt. It is Germany’s biggest airport and it’s busiest passenger hub, serving over 64 million passengers in 2017. It is operated by Fraport and serves as the main hub for Lufthansa including Lufthansa CityLine and Lufthansa Cargo as well as Condor and AeroLogic. The airport covers an area of 2,300 hectares (5,683 acres) of land[5] and features two passenger terminals with a capacity of approximately 65 million passengers per year, four runways and extensive logistics and maintenance facilities.