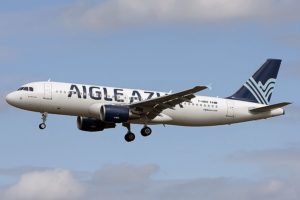 The French airline Aigle Azur, which has operated two weekly flights from Paris to Moscow since December 2017, will add a third flight to since December 26, and the fourth flight from March 4, 2019.

The airline launched the first two flights from Moscow’s Domodedovo airport to Orly, Paris, a year ago. Now two more flights will be added to them. Flights are operated on Airbus A320 liners in a two-class layout, which includes 12 seats in business class and 168 in the economy.

The flights from Moscow will be operated on Mondays, Wednesdays, Fridays and Sundays at 5.30 am. From Paris – on Mondays, Tuesdays, Thursdays and Saturdays at 22.45.

According to the airline, the minimum cost of a flight starts from 74 EUR one way, including all taxes and fees.

Aigle Azur is the second largest French airline, founded in 1946. The company has a head office in Tremblay-en-France near Paris. It operates domestic scheduled passenger services and international services to Western Europe and Northern Africa, as well as long-haul flights to Brazil and China.