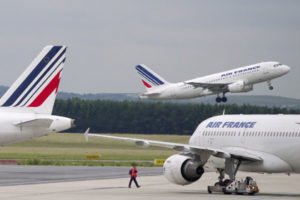 French President Emmanuel Macron considers it necessary for the Government of the Netherlands to clarify its position after its unexpected purchasing of a 12.7% stake in the French-Dutch airline Air France-KLM.

“Certainly, there can be no question of challenging the sovereign right of the Netherlands to enter the capital of Air France-KLM. This would mean challenging the principle of sovereignty [of countries] in the European Union”, said Emmanuel Macron, speaking at the Elysee Palace before the start of a working meeting with German Chancellor Angela Merkel. “However, I would like to remind you that a number of French ministers have already indicated that the French government was not informed about this decision and its implementation, and I will take this into account. Now the Netherlands should clarify their intentions in this case”, added he.

Emmanuel Macron confirmed that, in connection with the current situation, the Minister of Economy and Finance of France Bruno Le Maire invited his Dutch counterpart Wopke Hoekstra to arrive in Paris in order to give all the necessary explanations in this case.

“This is a large European company with many employees from France and the Netherlands, as well as other countries. Therefore, it is especially important in this case to ensure that the interests of this company are protected and that the rules of corporate law are observed. And also internal policy issues did not have an impact on the debates that will unfold at the board of directors of the company”, added the French President.

He stressed that France “advocates that Air France-KLM remains a strong company”.

Earlier, the Dutch government acquired a 12.7% stake in the Franco-Dutch airline group Air France-KLM for 680 million EUR. In the future, the authorities plan to increase their stake in the company to about 14%.