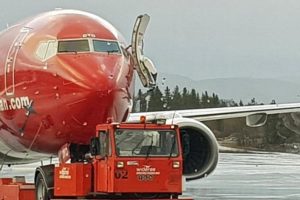 Front door of Norwegian Air Shuttle Boeing 737 was damaged after hitting jetbridge in strong winds. The accident happened at Harstad/Narvik-Evenes Airport when the airplane was preparing to takeoff en route to Oslo. The damage of the door was serious and the flight was cancelled.

“There was a sudden, strong wind that got stairs in front of the plane to move on. They hit the front door and damaged it. It was not possible to close it again. The airport staff got a new staircase so the passengers got out”, reported the airport officials.

No passengers nor employees were injured in the incident. The investigation for the root cause of the accident is under way.

However, the passengers complained that after the accident the whole plane began to vibrate and they heard a bang until waiting for the new jetbridge to arrive.

All the passengers were returned to the terminal, where were rebooked for another flight with replacement aircraft.