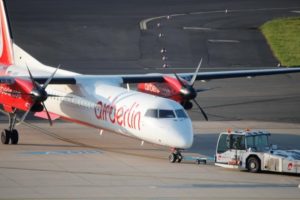 The future of bankrupted German airline Air Berlin will be resolved after the German parliamentary elections on September 24. The plan is to reach a final decision on September 25, said company spokesman Ralf Kunkel. The deadline for bidding for the assets of the second largest German airline expires today.

Air Berlin initiated a bankruptcy filling last month after its biggest shareholder Etihad Airways halted financial support for the company. The aircraft of the airline are still flying thanks to a bridge loan of 150 million EUR granted by the German government.

There are many potential buyers for the assets of the carrier, with Lufthansa appearing to be the top position.

Former Formula One pilot Niki Lauda announced yesterday that he and Condor, a member of the Thomas Cook group, will offer about 100 million EUR to buy a quarter of the Air Berlin fleet. The consortium plans to buy 38 of 144 aircraft and its Niki sub-division, released Niki Lauda in an interview.