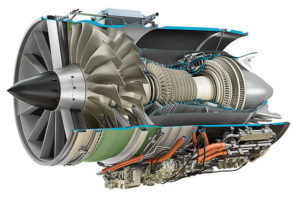 The American company GE Aviation introduced the Affinity turbofan jet engine, which is supposed to be installed on the promising supersonic passenger aircraft AS2. The new power plant constructively combines the features of jet engines with a small degree of bypass for military aircraft and power plants with a high degree of bypass for passenger aircraft. At the same time, there are no new and breakthrough technologies in it.

For supersonic flights, conventional turbofan engines of modern passenger aircraft are not suitable.

Its new Affinity engine, GE Aviation refers to power plants with an average degree of bypass. The basis of the engine is a modified gas generator of the CFM56 turbofan engine, which, in turn, is structurally based on the gas generator from F101, the power plant for supersonic B-1B Lancer bomber. According to a record in the corporate blog of GE Aviation, the power plant will receive an upgraded electronic digital engine management system with full responsibility.

The new Affinity power unit will be able to provide passenger flight at altitudes up to 18,300 meters. The developer claims that the new engine will work effectively at supersonic and subsonic flight speeds. Presumably, the new engine will be fully ready by 2023. Aerion plans to conduct the first flight of the AS2 supersonic passenger aircraft in June 2023.