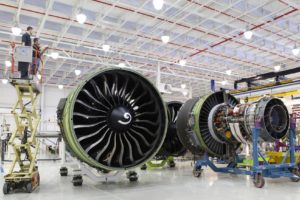 The US company GE Aviation together with the US Army specialists have completed tests of the first prototype of a new gas turbine engine, which is being developed within the framework of the FATE (Future Affordable Turbine Engine) program. According to the report of the American company, in the construction of the engine were widely used composite materials, while its matrix was ceramic. The propulsion system successfully passed a series of bench tests, including separate compressor checks.

In 2011, the US military announced that they needed new gas turbine engines, which would be economical in operation and relatively inexpensive in production. Propulsion systems are planned for different types of helicopters. According to GE Aviation, the use of ceramics in the design of promising engines will make it possible to reduce the cost of their production by simplifying the cycle and reducing the cost of operation due to the greater resource of ceramic composites in comparison with traditional materials.

Ceramic composites matrix have a wide range of operating temperatures, and parts made of such materials can normally be operated at much higher degrees than conventional elements of metal alloys. This makes it possible to expand the operating range of the propulsion system as a whole. In FATE power units, ceramic parts will be manufactured using 3D printing technology.

According to the requirement of the military, new engines should have 80% more power. In addition, the specific fuel consumption of the new engines should be decreased by 35%, and the calculated resource to be 20% more. Finally, the cost of production and maintenance of FATE powerplants should be reduced by 45 percent. In GE Aviation, these requirements are quite feasible.

Tests of the first prototype of the FATE project engine began in the fall of 2016. The engine went through a lot of start and stop cycles, it was checked for the possibility of long work. During the verification, the developers followed the reliability of the compressor, combustion chamber and turbine, these elements were checked both in the power plant and separately on a special stand. Other details about the inspections are not disclosed.

The engines of the FATE project will be available in several versions. They will differ from each other in size and power. Depending on the version, the engines will be able to develop power from 5,000 to 10,000 hp (3,700-7,400 kW). First of all, the power plants of the FATE project are considered as a replacement for T700 engines of helicopters AH-64 Apache and UH-60 Black Hawk.