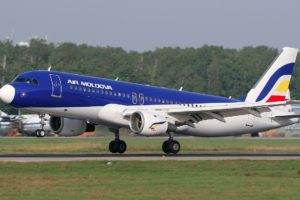 Gear tyre bursted during landing of Air Moldova’s plane Airbus A320-200 on Chisinau’s airport runway 26. The aircraft was making a voyage from Antalya (Turkey) to Chisinau (Moldova), but during landing burst a left main gear tyre. However, the landing continued safely and the aircraft taxied to the terminal, where all the passengers were disembarked without reported injuries.

However, the accident caused x-shaped fracture of the aircraft. Fortunately the damages were very slight and were repaired for several hours. After safety inspection, the Air Moldova’s plane Airbus A320-200 was released to return in service and about 4 hours later departed for its next flight.

The runway inspection revealed debris on the track, which were cleared before airport operations to be restarted.

Fortunately during the incident there were no report for injuries and serious damages.

Airbus A320-200 is short- to medium-range, narrow-body, commercial passenger twin-engine jet airliner. The aircraft is low-wing cantilever monoplane with a conventional empennage with a single vertical stabilizer and rudder. Its wing sweep is 25 degrees. Compared to other airliners of the same class, the Airbus A320 features a wider single-aisle cabin of 3.95 m outside diameter. Its cargo hold can accommodate Unit Load Devices containers.