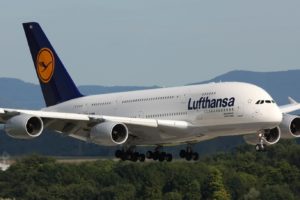 The intention of Deutsche Lufthansa to buy most of Air Berlin assets, which declared itself bankrupt on August 15, caused criticism from both German authorities and independent bodies fighting against unfair competition.

“Air Berlin and Lufthansa on many routes are direct competitors, so to permit the acquisition of Air Berlin, Lufthansa will have to fulfill a number of stringent conditions, in particular, to abandon attempts to obtain the majority of the slots currently owned by Air Berlin”, said the head Commission for Monopoly Affairs Achim Wambach.

In turn, the president of the Federal Cartel Office Andreas Mundt told that his office would “carefully study” the plans of Lufthansa.

“With the transitional loan that we provided to Air Berlin, it has the necessary time to find a good solution and negotiate with other airlines”, said Minister of Economy, Brigitte Zypries.

As reported, Air Berlin will be able to continue flights for three more months thanks to a loan of 150 million EUR, allocated by the government. This decision was taken by the Ministry of Economy and Transport of Germany. In some areas of the country, school holidays continue, and possible suspension and cancellation of flights may cause problems for returning of many people. In addition, the German authorities are concerned about the fate of 7,200 employees of the airline.

According to Andreas Mundt, Lufthansa has not yet announced its intention to absorb Air Berlin. However, officials and analysts said that negotiations to sell part of the Air Berlin to the Lufthansa Group are already in the “decisive stage”.

At the same time, some other sources informs that the decision is expected within a month, and the main assets of Air Berlin will be shared between Lufthansa, Condor and Eurowings. The Chairman of the Board of Air Berlin Thomas Winkelmann confirmed that the airline is in talks to takeover with three interested companies, but did not name them.

Lufthansa intends to take 90 out of 144 aircraft from Air Berlin and fully acquire its Austrian subsidiary Niki. As reported, the procedure for bankruptcy of Air Berlin was announced on August 15, after the main shareholder of Etihad Airways said that it would cease further financing of the indebted German air carrier.

Air Berlin has been trying for several years to solve its financial problems by cutting staff and aircraft fleet. At the end of 2016, its loss increased to 781.9 million EUR compared with 446.6 million EUR in the previous year, while revenue, on the contrary, fell to 3.785 billion EUR from 4.082 billion EUR.

Air Berlin, which began flights in April 1979, ranked second among German airlines after Lufthansa, flying to 135 destinations around the world. In 2016, the company carried about 29.9 million passengers.