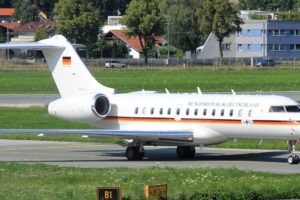 German Air Force plane Bombardier BD-700-1A11 Global 5000, which was scheduled to perform a flight to Berlin Tegel with Chancellor Angela Merkel, was hit by a Renault Trafic transporter at Dortmund International Airport. The flight was canceled.

The first investigation details read curiously, as a female employee of the airport was driving a red van on the runway, but when she saw the chancellor’s white jet with the inscription “Federal Republic of Germany”, she jumped out of the vehicle to make a photo with her smartphone. Unfortunately, forgot to apply the handbrake and the var collided with the airplane Bombardier BD-700-1A11 Global 5000.

The nose of the jet was damaged. Chancellor Angela Merkel was not on board of the plane, but she was forced to have a long journey turning back to Berlin, due to cancellation of her flight.

Inspection should now determine how bad the jet is damaged.

Bombardier BD-700-1A11 Global 5000 has a large cabin, 6,000 nmi / 11,100 km range business jet manufactured by Bombardier Aerospace. The plane is equipped with new Rolls-Royce Pearl engines with lower fuel burn and more range was unveiled in May 2018.