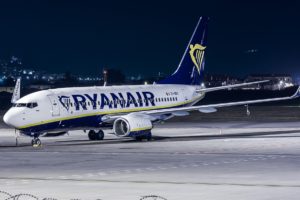 The German pilots union Vereinigung Cockpit (VC) called for strike on the local employees and flight attendants of the Irish low-coster Ryanair. The trade union states that the strike can begin at any time, but will not affect the period of Christmas holidays from December 23 to December 26.

The union hopes to involve Ryanair in negotiations on “market conditions of work and payment”. In particular, its representatives insist the salaries of Ryanair pilots to be raised to the level of salaries in the German Tuifly airline. The airline has so far shown no willingness to compromise, claiming that its salary structure has been approved by the Irish high court. They have dismissed the VC complaints as baseless.

“From this moment on strike measures could happen at any time, except during the Christmas period between December 23 and 26”, says the statement of Vereinigung Cockpit.

The announcement of Vereinigung Cockpit comes after pilot’s unions in Portugal and Italy had also called their members to strike against the Irish company. The labor leaders across Europe are making an aggressive unionization drive for better working conditions at Ryanair, challenging a low-cost business model that helped make the Irish company the region’s biggest budget airline

With its more than 9,400 members in Germany, Cockpit was able to squeeze a pay, pensions and jobs deal out of mammoth carrier Lufthansa earlier this year, after repeated walkouts between 2014 and 2016 cost the group around 450 million EUR.