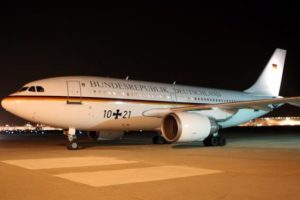 German President Frank-Walter Steinmeier was forced to postpone departure from Ethiopia, due to problems with the government airliner.

The aircraft suffered a problem with the compressing air supply system. It is supposed to be eliminated soon at Addis Ababa Airport. Until then, the delegation of the head of Germany consisting of 55 people will be accommodated in one of the local hotels.

This is the third time in the past few months when representatives of the German authorities are forced to adjust the working schedule due to problems in the aircraft.

On November 29 last year, a similar situation occurred with the aircraft of the Chancellor – Angela Merkel, who interrupted the flight to Argentina due to a technical problem with the airplane. The plane of the head of the Cabinet was in the air for about an hour, when over the Netherlands the crew decided to turn back to Germany. Тhe Airbus A340 safely landed in Cologne. Merkel failed to fly on the same day to South America.

On January 11, 2019, German Minister for Economic Cooperation and Development Gerd Muller, after completing a tour of African countries, was forced to return to Berlin from Zambia on a flight of local airlines. The reason – the failure of the government liner Bombardier Global 5000.