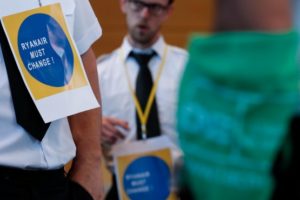 In the context of the working conditions conflict with the Irish airline Ryanair, the German trade union Ver.di started negotiations on collective agreement for approximately 1,000 cabin crew members of the airline in Germany. They will take place in the Irish capital – Dublin.

The union demands more money and more security for the cabin crew.

“Income must finally become viable and predictable”, said Ver.di’s board member Christine Behle, due to seasonal fluctuations and lack of flight hours guarantees, some full-time employees receive “only about 1,000 EUR gross monthly”. This is “totally unacceptable”, she explains.

“We expect Ryanair to recognize local social standards without delay and collective agreements will have to be applied to all Ryanair cabin crews located in Germany, and this applies to those who work for subcontractors in even worse conditions”, said Christine Behle. According to Ver.di, its staff accounts for about 50% of the cabin crew.

On Friday, Ryanair’s pilot strike caused hundreds of flight cancellations in a number of European countries. Pilots insist on better working conditions and higher wages. Last months Ryanair has been criticized for paying its employees significantly less than other low-cost airlines. Only last year, after strong pressure, the Irist airline agreed on a principled basis to recognize trade unions.

In July, Ver.di and Ryanair signed a recognition agreement. At the first international conference of cabin staff at Ryanair in Dublin, a pan-European list of requests was drafted. Trade unions in more than 13 countries require Ryanair to provide sustained working conditions for all cabin crew members.

Ryanair operates more than 2,000 flights per day serving 223 airports in 37 countries across Europe and North Africa and insists it will not change its low cost model that has transformed the industry and has made Ryanair the most profitable airline in Europe.

But it further angered the trade unions by threatening to move jobs away from the cities affected by the strikes and began to apply Dublin’s practice where its winter fleet fell by 20% and issued 300 redundancy warnings (100 pilots and 200 cabin crew).

According to the airline, the reason is that strikes have hurt reservations, although it is too early to assess the impact of other strikes.

The problems in the airline emerged after the complications with the pilots’ planning in September 2017, causing a serious labor conflict and canceling a total of 20,000 flights in the coming months.

The crisis has forced Ryanair to start negotiations with the trade unions in several countries after refusing to recognize them.