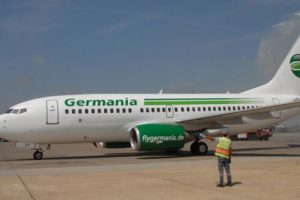 Germania airline has filed for bankruptcy and suspended all the flights. The airline, which has a fleet of 37 aircraft, had flown mainly Mediterranean, North African and Middle Eastern holiday routes for German sun-seekers on package trips, and said it transported over 4 million passengers per year.

“Unfortunately, we ultimately failed to successfully complete our financing efforts to meet short-term liquidity needs”, said the managing director Karsten Balke in a statement. “We very much regret that, as a consequence, we had no choice but to file for bankruptcy”, added he.

The bankruptcy happened against steep kerosene price increases over the summer of last year with a simultaneous fall of the euro against the US dollar, which seriously worsened the free cash flows of the airline. Moreover, the Germania had a high number of technical services required by its fleet of aircraft during the last month.

After boasting of a monetary windfall of over 15 million EUR in January, the company said last week that their staff had not received their salaries for the entire month of January.

Germania is a privately-owned airline founded in 1978.