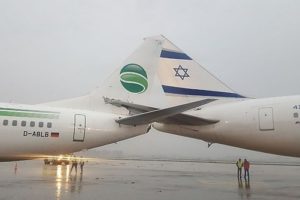 Airplane Boeing 737 of the German airline Germania collided with Boeing 767 aircraft of the Israeli carrier El Al at the Ben Gurion airport near Tel Aviv. The accident happened on the ground during towing operations.

According to the publication, none of the passengers was injured during the collision. They all safely left the cabin liners. At the same time, the impact was that the tail units of the airplanes were damaged. The passengers were rebooked to other flights.

The Israeli aviation authorities began investigating the incident. The El Al liner was preparing to fly from Tel Aviv to Rome, while the Germania aircraft was maneuvering to takeoff en route to Berlin, and the towboat was taking out the German Boeing 737 from the terminal.

Ben Gurion International Airport, commonly referred to as Ben Gurion Airport or Natbag, is the main international airport of Israel and the busiest airport in the country, located 19 km to the southeast of Tel Aviv. The airport serves as a hub for El Al, Israir Airlines, Arkia, Up and Sun D’Or. It is operated by the Israel Airports Authority, a government-owned corporation that manages all public airports and border crossings in Israel.