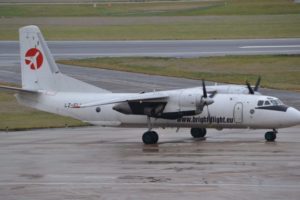 Gomair Airlines An-26 crashed in the Democratic Republic of the Congo, killing six people – five crew members and one passenger.

According to an official from an election commission who chartered a plane to deliver electoral materials to the city of Chikapu (Kasai province), the aircraft crashed during landing near the airport in Kinshasa. Data on the nationality of the crew and passenger were not reported.

“We are still conducting research so we are not able to give precise details on whether the plane went lost or it has crashed”, said Gomair’s financial director, Jean de Dieu Gato Karekezi.

The aircraft departed from Tshikapa, in the southwest of the Democratic Republic of the Congo, about 700 km away from Kinshasa, on December 20. It didn’t arrive at its destination after being cleared to descend to 5000 feet about 35 km away from the destination airport. Shortly afterwards, the plane disappeared from radar screens. There were three crew members, one loadmaster, four additional passengers and 400kg of freight on board the plane. No survivors were found. At the time of the crash, it was raining in the region around Kinshasa.