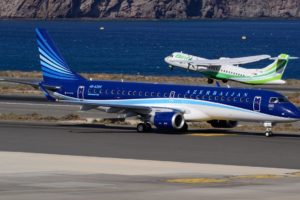 The government of Azerbaijan plans to carry out a number of activities in 2018-2021 within the framework of modernization of the republic’s airports and the development of civil aviation, noted the draft budget for 2018 and the next three years.

The government plans to build a new Air Navigation Center on the territory of the International Airport Heydar Aliyev in Baku. In addition, the government will allocate money for the construction of a radar system at Yevlakh airport, as well as extension of runways at Nakhchivan and Zagatal airports.

As part of the development of civil aviation and increase its profitability, in 2018-2021 the government of Azerbaijan plans to expand the flight of low-cost airline Buta Airways to the CIS countries, Turkey, Iran and other areas.

Withing the draft budget and plan is schedule also purchasing of aircraft produced by the Brazilian aircraft manufacturer Embraer.