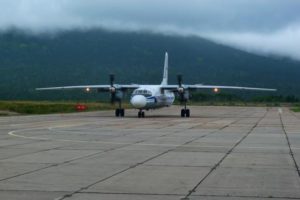 Government of Japan investigate the issue of technical assistance in the modernization of the Mendeleyevo Airport on the South Kuril Islands Kunashir.

“The government of our country intends to work out specific issues to improve the quality of trips of former residents to visit the graves of their ancestors on Kuril Islands”, said the official representative of this Japanese cabinet. “At the same time, we will listen to the views of the current delegation members, hold consultations with the Russian side within the framework of our legal position [regarding the ownership of these territories]. In any case, we intend to work on improving such trips”, added he.

On Saturday morning, a group of 68 Japanese citizens, including former residents of the South Kuril islands and their relatives, flew from Nakashibetsu Airport on the island of Hokkaido. The aircraft made an intermediate stop on Kunashir, where part of delegation remaining, and then proceeded to the island of Iturup. Unfortunately on the way back there was a bad weather and aircraft was not able to land on Mendeleyevo Airport in Kunashir to pick up the remaining part of the delegation. Thus, the Japanese delegation, divided into two parts, spent the night in the territory of the Russian Federation, which raised the question of the desirability of modernizing the Mendeleyevo Airport in order to make it more weatherproof.

The charter flight to the Kuril Islands was to be held back in June 2017, but was canceled due to bad weather at the airport of arrival. The agreement to hold such a visa-free trip was reached at a meeting between Russian President Vladimir Putin and Japanese Prime Minister Shinzo Abe on April 27 in Moscow. In July, when they met in Hamburg, the prime minister and the president agreed to organize a flight in September.