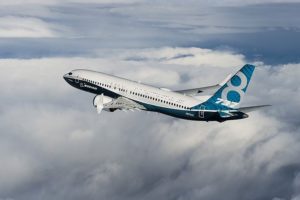 Suspending the operation of Boeing 737 MAX aircraft and reducing its production will cost the aircraft manufacturer at least 1 billion USD. This is stated in the presentation for the company’s shareholders, published on Wednesday after the release of the financial statements for the first quarter.

This amount also includes losses from the cost of additional training for pilots, as well as to eliminate errors of airliners software. At the same time, the experts believe that the total loss of Boeing can be up to 3 billion USD if you take into account payments to the families of 737 MAX people killed in the two disasters.

On Wednesday, Boeing released corporate reports, which state that the company’s net profit in the first quarter of the current year declined by 13% compared to the same period a year ago, to about 2.2 billion USD, reaching 22.9 billion USD.

In March, a Max 8 belonging to Ethiopian Airlines crashed, killing all 157 passengers and crew.

It was the second crash involving a Max 8 jet in five months. The two disasters prompted aviation regulators around the world to ground the aircraft.

Boeing is temporarily cutting production of the 737 airliners from 52 planes a month to 42 from this month. Despite the drop in production Boeing has not laid off staff and is maintaining order levels with many suppliers, all of which is keeping costs high. Meanwhile, some 50 deliveries of new 737 Max planes have been withdrawn.