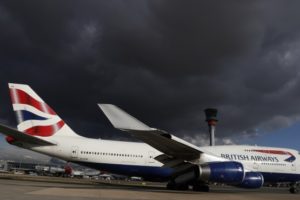 Hackers have stolen personal and financial data of 380,000 British Airways customers, confirmed the International Airlines Group, which manages the British airline and the Spanish Iberia.

The site of British Airways and its mobile application were subject to the hacker attack. The customers who paid their tickets by credit card from August 21 to September 5 were affected. The stolen information does not include passport data and scheduled flight data.

British Airways has begun an investigation and maintains contact with the affected customers. The airline has notified the police and relevant authorities.

The breakthrough is fixed and the airline’s site is working normally.

British Airways is the flag carrier and the largest airline in the United Kingdom based on fleet size, or the second largest, behind easyJet, when measured by passengers carried. The airline is based in Waterside near its main hub at London Heathrow Airport. In January 2011, British Airways merged with Iberia, creating the International Airlines Group (IAG), a holding company registered in Madrid, Spain. IAG is the world’s third-largest airline group in terms of annual revenue and the second-largest in Europe. It is listed on the London Stock Exchange and in the FTSE 100 Index.