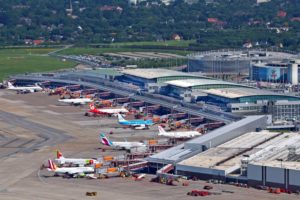 Hamburg Airport cancelled 58 of 388 flights scheduled for February 4 due to the strike of the ground support services.

“Airlines have already cancelled 58 of the planned 388 flights due to the strike of the ground handling services at the airport in Hamburg. It is possible to have further delays and cancellation of flights”, says the statement of the airport. It is also noted that at the moment the shuttle, which usually runs between various structures of the hub, is not traveling.

As noted, the Verdi trade union announced a 24-hour strike service for ground support of aircraft in the Hamburg airport. The administration of the air hub recommends that passengers fly without baggage whenever possible.

In January there were strikes at a number of German airports. The work of the airports of Bremen, Hamburg, Hanover, Dresden, Düsseldorf, Cologne/Bonn, Leipzig, Munich, Stuttgart, Erfurt, as well as the country’s largest air hub in Frankfurt, was hampered for several hours. More than a thousand flights were canceled, strikes violated plans for more than 300,000 passengers.

Verdi claimed the 16,000 security personnel at German airports to appointed at a single salary of 20 EUR per hour. Now the salary depends on the region, as well as on what exactly is the responsibility of the employee. At the end of January, representatives of the Verdi union and the Federal Association of Flight Safety Services Companies (BDLS) came to an agreement on the issue of increasing the salaries of security personnel at German airports. However, this increase will be gradual.