This post has been brought you by laroja-deportesonline.com   The best online site to watch live soccer matches

Impressive the way in which an astronaut grew by the fact of travelling to space, microgravity caused this unusual phenomenon.

The Astronaut is the person who, after rigorously training, has the ability to operate, pilot or be part of the crew of a spaceship. They are employed to work in space programs, and these are coordinated and executed by the different governments, through their civil or military entities; However, there are certain private companies dedicated to the organization of commercial trips to space.

Hazza Al Mansoori, had the great fortune that last week he became the first Emirati astronaut to reach the International Space Station, says that his head grew when he experienced the conditions of microgravity. This was said during a video conference with students who met at the Mohammed Bin Rashid Space Center, reports Emirates News Agency.

“Many changes have occurred in my body; the size of my head increased due to the influx of fluids. My sense of smell also changed. But I began to adapt and get used to it soon after.”

The astronaut also replied that he believes that microgravity is “the most beautiful thing in the IEE” and commented that he has visited all parts of that station. In addition, he promised to show it in a video in Arabic.

Al Mansoori arrived at the ISS on September 25, as part of an eight-day mission, under a contract between the United Arab Emirates and the Russian space agency Roscosmos. The astronaut will conduct 16 scientific experiments in cooperation with international space agencies. 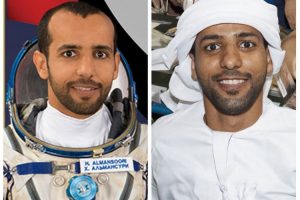 Newer PostAre They UFO’s? 14 Strange Bright Balls Of Light Seen Hovering Over The Atlantic Ocean (WATCH THE VIDEO)
Older PostFive Dead In An Emergency Landing Of A Ukrainian Cargo Plane From Spain (IMAGES)