A ski instructor from Bariloche had traveled to the European country but the disease outbreak left him without a job.

Upon returning to the country, he learned that he traveled on the same flight as the first person diagnosed with the virus in Argentina.

Pablo Bernardello, a 44-year-old ski instructor from Bariloche, starred in a rather peculiar story that took him to the national media.

It is that he had to return from Italy following the outbreak of coronavirus that has that country in suspense, but upon returning to Argentina he discovered that he shared the plane with the first infected of these latitudes.

When Pablo, 44, arrived at the beginning of January in Marilleva, in northern Italy, 60 km from Trento, an ideal season was waiting for him.

For two months I was going to give ski lessons to tourists from all over the world who choose that exclusive destination for its appetizing snowy peaks.

Once the season is over, at the beginning of March, Pablo would wait for his partner, Macarena, to fly from Argentina to Italy, together to take a vacation through Europe.

The idea was to tour Venice, Verona and Trento, in a first stage.

Then, cross the English Channel to walk around London for four days. Finally, return to Italy, and from Milan rent a car and walk along the coast to Rome.

While  the spread of coronavirus in Italy was advancing, which already caused the death of more than 100 people and left more than 3,000 infected, its planning receded.

First, all reservations for ski lessons in the month of February were canceled. Then, with their partner they decided that the best thing was to suspend the trip and try to return to Argentina as soon as possible. 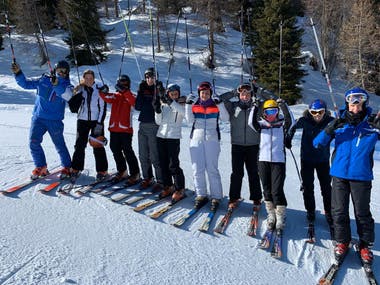 From Tije Travel, they indicated that they are based “on the procedures of each airline” and that “the penalty for changing the reservation of the ticket is added a difference for the fare”.

The setbacks also continued on the flight that brought Pablo to Argentina. Because on that Alitalia plane, which left Rome at 9:45 p.m. (Italian time) with flight number 680 , in addition to the passengers, the covid-19 was traveling. In first class, an Argentine was infected.

It was a normal return, like any other, until 30 minutes before landing. At that time, after activating the protocol for flights that come from risk zones for the coronavirus, all passengers recalled that for almost two months the Covid-19 has been alerting the entire world.

“The hostesses distributed some forms – Pablo says – in which we had to complete where we had been and if we had any symptoms. Once we landed, in the sleeve, at the exit of the plane, two people with safety instruments received the sheets , they checked them and allowed us to continue the descent.”

“Nobody took our fever,” says Pablo.

“From that moment, I self-assessed at the request of my acquaintances,” says from Bariloche , the city where he lives.

After unsuccessfully trying to communicate with the airline and the Ministry of Health, he consulted with his children’s pediatrician to know what to do.

“He spoke with the infectology sector of the Province and told me that if I had no symptoms, that I should remain calm, that I had no need to isolate myself,” Pablo concludes, already a little more relaxed.