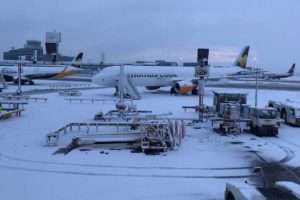 Heavy snowfall in the north-west of the UK led to disruptions in the airports of Manchester and Liverpool. At these two airports, the runways were completely closed. Currently, operations of the airports have been resumed, but the guide recommends that passengers check their flight status in advance due to possible delays.

“The runway is now open, but many flights have been delayed”, says the message posted by the Liverpool airport.

According to the forecast of local meteorological services, the air temperature in Manchester may drop to -11 degrees Celsius, which will be a record low figure recorded this winter in this city.

“One of our runways has now re-opened for departures and arrivals”, says the statement of Manchester Airport authorities. “Our airfield team has been working through the night to keep the runways clear, which resulted in the day’s operations starting as planned. However, as conditions worsened significantly this morning, we took the decision to temporarily close our runways”, adds the statement.

Frustrated passengers tweeted they have been stuck at the airports or on planes since early morning.