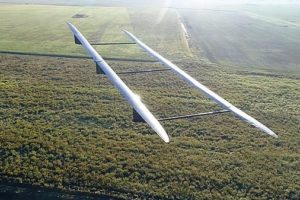 Prototype of the promising high-altitude ApusDuo biplane drone, developed by the American startup UAVOS, made the first flight. According to the company, the first checks of the electric device equipped with solar batteries were completely successful.

UAVOS refers ApusDuo to pseudo-satellites, unmanned aerial vehicles with a very long duration of flight. These drones are able to stay in the air for months. Pseudo-satellites can be used for reconnaissance, retransmission of signals, surveillance, providing Internet coverage, electronic intelligence.

The wingspan of ApusDuo is ten meters. The drone has three fuselage, in the fore and aft of which are installed the wings. The front wing is fixed on the fuselage through a system of hinges. The rear wing is located above the fuselage. On the keel of the middle fuselage is mounted an electric motor with a pushing propeller.

It should be noted that the electric motor with a propeller does not work throughout the flight – it is activated only for the time of climb, as well as maintaining speed. Part of the flight drone conducts in planning mode. The electric motor of the device is powered by batteries and solar panels. The latter are located on the upper surfaces of the wings.

During the first flight of ApusDuo, the experts checked the operation of its onboard systems and autopilot in take-off, flight and landing modes. After completion of the test, the developers will collect a full-size flight model of a drone with a wingspan of 28 m.

In a full-sized drone, the flight control will be carried out by controlled deformation of the flexible wing.