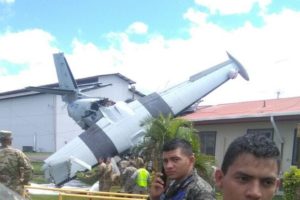 Honduras Air Force plane Let L-410UVP-E3 crashed in a building of the military airbase Soto Cano, which is better known as Palmerola. The aircraft was making a training flight with three military personnel on board, but started losing height and crashed into the accommodation area. The pilot of the airplane died during the accident, while the two other people were in critical condition severly wounded.

The paramedics of the air base gave first aid to the people, but unfortunately failed to rescue the captain and first pilot of the flight.

Fortunately during the aviation accident, there were no injured people from the accommodation building and on the ground.

Let L-410 Turbolet is a twin-engine short-range transport aircraft, manufactured by the Czech aircraft manufacturer LET, mostly used for passenger transport. The aircraft is capable of landing in small and unkempt airports and capable of operating under extreme conditions from +50 degrees Celsius to -50 degrees Celsius. Since 1969, more than 1,100 airframes have been produced, which were shipped to Europe, Asia, Africa and South America.